At the 7th Africa Agriculture Science Week and FARA General Assembly in Kigali, Rwanda, June 12-15, over 1500 scientists, senior government officials, policy makers, economists, and others came together in support of the use of science and technology to transform African agriculture.

— The CGIAR system is reorganizing for greater impact 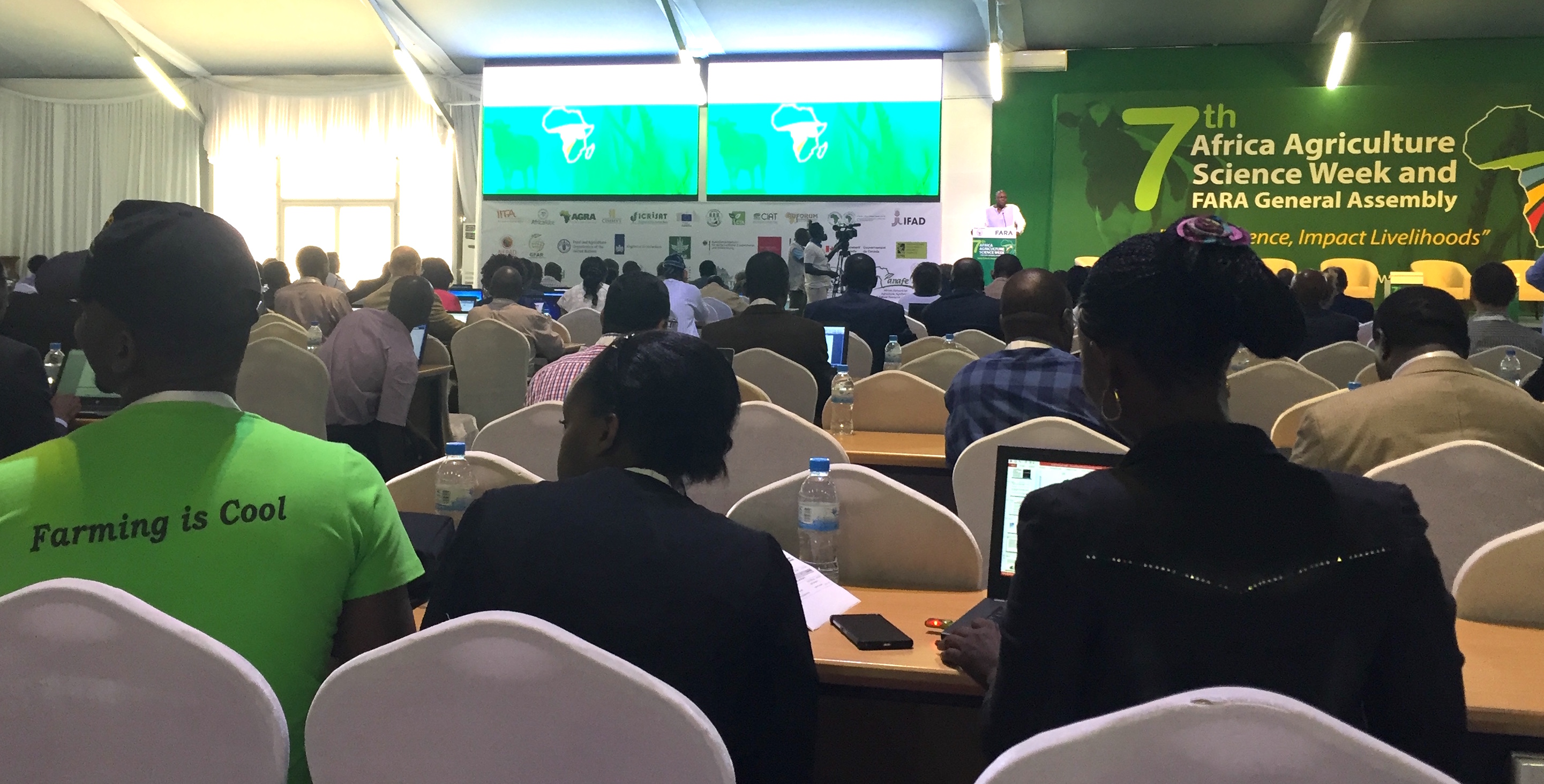 Two thirds of Africa’s workforce is employed in the agricultural sector, yet the continent imports over 80 percent of its food, and more than 40 percent of people live below the poverty line. Even with large imports, many Africans are still not fed adequately, and the population is on course to grow by 1.3 billion people by 2050, more than half of the projected global population growth.  Agricultural transformation is desperately needed for a food secure future.

Increasing agricultural productivity has the potential to lift many out of poverty, raise incomes across the continent, and reduce dependence on imports. And to drive prosperity, Africa must also must develop food processing capabilities higher up the value chain. One striking example mentioned by Dr. Akinwumi Adesina, President of the African Development Bank (AfDB), is that Africa produces 70% of the world’s cacao beans yet only 2% of the world’s chocolate, indicating that there are significant gains to be made in Africa by building its processing capacity.

To become a net exporter of agricultural products, Dr. Chiji Ojukwo of the AfDB stated that an investment of $40 billion per year over the next 10 years is needed. The return on this investment could be as high as $85 billion per year from 2025 onwards. Agriculture can therefore be a major source of wealth creation in Africa, rather than a sector focused solely on subsistence as it is often seen.

To help achieve agricultural transformation, Dr. Adesina announced that the African Development Bank will invest $24 billion in agriculture over the next ten years: a 400% increase in AfDB’s funding for agriculture designed to send a strong message to African governments that investing in agriculture makes good economic sense. Along with this were other pledges in support of African agriculture:  Mr. Michael Ryan, head of the EU Delegation to Rwanda,  reported that 200M Euros is proposed for all areas of agriculture in Rwanda, and Dr. Stefan Schmidt of the One World No Hunger Initiative detailed the German government’s investment of 1.5 Billion Euros per year in support of country initiatives via a range of instruments and a strong focus on Africa.  The aim is to support innovation, including science, better institutions, and organizational concepts, as a key driver of progress for agriculture.

Mr. John Wakiumu, Program Officer in Innovative Finance at The Alliance for Green Revolution (AGRA), reported success with other financial instruments.  In one example, AGRA made credit guarantees and leveraged a $17M investment into $160M in credit for farmers and agribusinesses from government banks and the International Fund for Agricultural Development.

Africa is growing its scientific capacity and expertise at centers of excellence such as the Biosciences Hub for East and Central Africa (BecA), and at CGIAR centers such as IITA, ICRISAT, and ILRI. These centers are outfitted with facilities for using the molecular biosciences needed to pursue advanced breeding techniques, and increasingly African scientists are choosing to pursue careers here instead of moving abroad. BecA Director Dr. Appolinaire Djikeng emphasized the importance of creating partnerships to help build capacity, highlighting work with CSIRO, AusAID, and ILRI that established the first aflatoxin testing facility and training platform in Sub Saharan Africa that has hosted up to 50 scientists from across Africa so far.

Dr. Kwesi Atta-Krah, IITA Director of Humidtropics, announced that the 15 centers that constitute the CGIAR have embarked on an integration process that will promote more cross-center working and facilitate country-specific plans that take into account the whole agri-food system.  Priority countries include Ethiopia, Tanzania, and Nigeria.  More on the integration process can be found here: CGIAR site integration.

Overall it’s clear that scientific advances, effective partnerships, and good policy are vital pieces of the solution for transforming African agriculture.  It must also include improved communication between researchers and farmers to ensure that the best advances are put into practical use.  Better engagement with farmers will ensure that products are developed with the greatest chance of benefit and adoption. For example, new varieties must be attuned to key farmer-preferred traits, such as color or cooking time, for the best chances of adoption.

Agriculture in Africa faces many challenges, but with 65% of the worlds’ arable land and significant proportion of its population employed in the sector there is great potential for growth. AASW7 demonstrated that there is significant political will and international support to put agriculture at the forefront of Africa’s economic development and that science must underpin the transformation.