The emergence of maize lethal necrosis disease (MLND) in east Africa has severely threatened the food and economic security of the region. Since MLND was first observed in Kenya in 2011 it has spread across east Africa, causing crop losses of up to 100% in Tanzania, Uganda, and South Sudan. 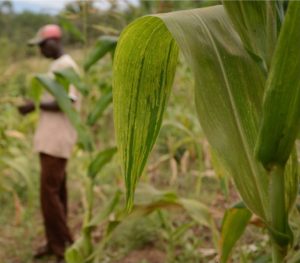 2Blades is committed to finding durable solutions for crop disease and recently provided support to Professor David Baulcombe (University of Cambridge) and a team of Kenyan collaborators who are working on a novel RNA approach to control the viruses that cause this terrible disease.

We spoke to Dr. Luke Braidwood, a postdoctoral research associate in Professor Baulcombe’s laboratory, about his work on this project and his hopes for delivering MLND resistant maize to farmers in the region. 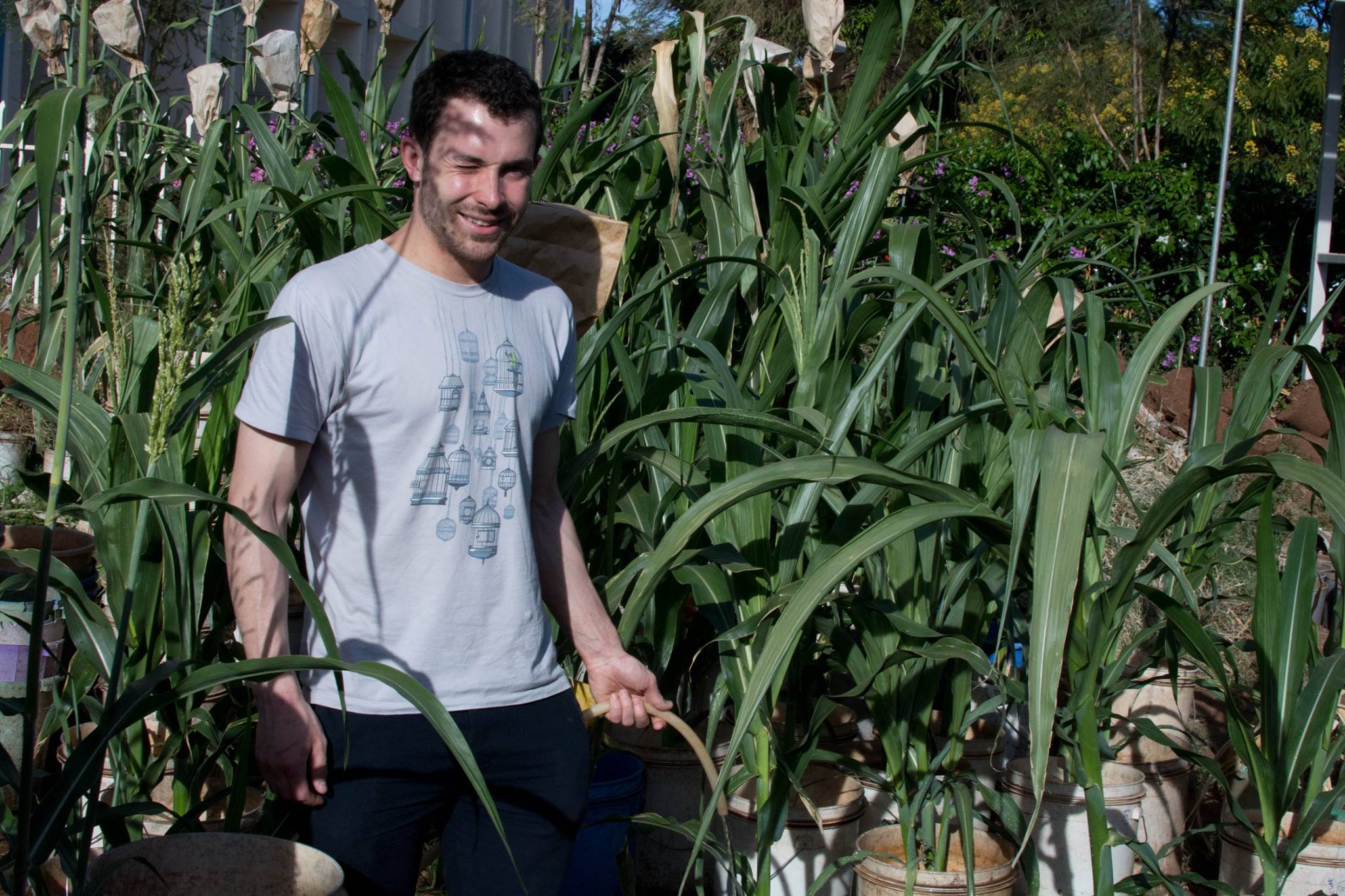 What is MLND and why is it such a big problem?

MLND, maize lethal necrosis disease, is a viral condition which can cause total crop loss in maize. Recently MLND has spread to China and East Africa, where the prevalent local maize varieties are highly susceptible to MLND, resulting in heavy losses (25% of Kenya’s 2013 maize crop). MLND is caused by the interaction of two viruses, making predicting the spread of the condition more difficult, due to their independent transmission.

Have you witnessed the impact of MLND in the field?

At the start of my PhD I sampled infected plants in Kenya, across a number of Kenyan counties. Chlorosis, or yellowing, is the most obvious symptom of MLND, and in some areas we could identify affected farms from the road by their yellow color, indicating that almost all plants were infected. We also met farmers who kindly allowed us to sample, and had seen the disease appear since 2009. Many were very eager to discuss how they could try to decrease losses to MLND, being smallholders who are financially and/or nutritionally dependent on their main crop, maize.

What is your proposed solution? How does it differ from other available control methods?

We propose to engineer the RNA silencing system in maize to recognize maize chlorotic mottle virus (MCMV), which is present in all MLND infections. RNA silencing is an antiviral component of the plant immune system, and our modification would ensure that MCMV is rapidly recognized and degraded when it infects maize cells. This is analogous to vaccination, in that it improves the speed of recognition by the native immune system.

Current control relies on cultural control and tolerant varieties which are currently being developed by CIMMYT and seed companies. Tolerant maize varieties are able to accumulate MCMV without a major yield decrease. In contrast, our engineered maize lines will be resistant, so MCMV will not accumulate. We believe multiple approaches to combatting MLND will be required. Our engineered lines will be of most value in regions with high levels of virus, allowing farmers to maintain yields while decreasing levels of virus in the environment.

How important are local partners to your work?

We would not have been able to carry out this work without the important contributions of complementary local partners. We (University of Cambridge) have expertise in RNA silencing and molecular biology, the Kenyan Agriculture and Livestock Research Organisation (KALRO) have a national network of agricultural extension officers, allowing us to sample maize effectively and safely, an MLND team who we are working with, as well as experience in conducting crop field trials. The Runo lab at Kenyatta University, Nairobi, have extensive experience in tissue culture and transformation of a number of crop plants, and undertook the transformation of local maize varieties with genes designed and synthesised at the University of Cambridge. The African Agricultural Technology Foundation (AATF) are leading our efforts in engagement with farmers, policymakers and the public, as well as mapping the project’s route through the Kenyan regulatory pathway. Finally, the Biosciences in eastern and central Africa-Institute for Livestock Research Hub (BecA-ILRI) has been generous in assisting us with shipping and laboratory reagents. This project is a catalyst for knowledge and personnel exchange between all involved institutes, which will ultimately strengthen all of our capabilities. 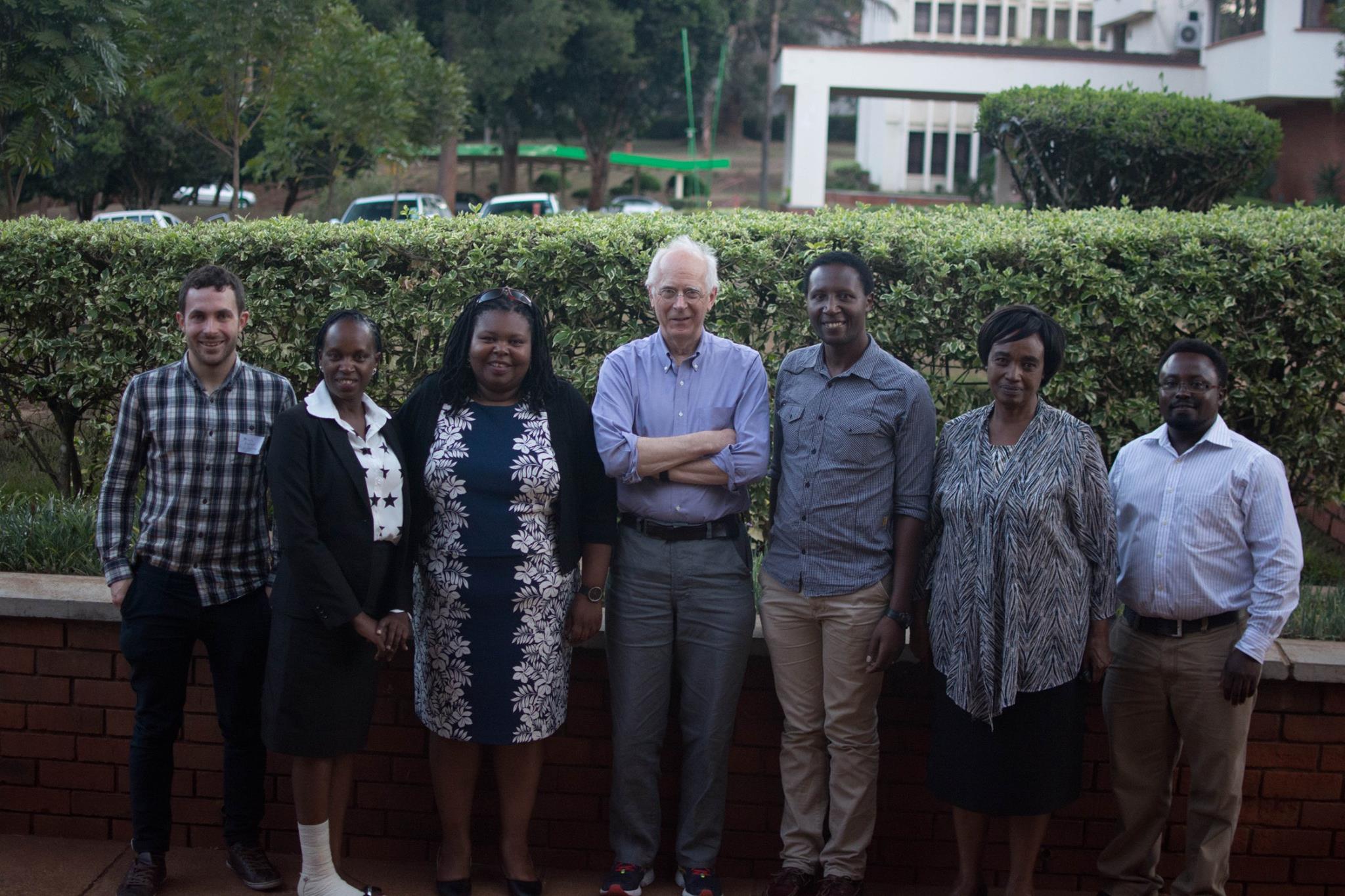 What are the main challenges to developing and implementing this solution?

The scientific challenges are in demonstrating the efficacy of our modified lines, and confirming that this effect is consistent in field as well as glasshouse conditions. In addition, as a genetically modified crop, we will need to engage with policymakers and the public to ensure they are informed, and following this ensure that the lines are distributed through a suitable mechanism for smallholders. Our partners at the African Agricultural Technology Foundation have expertise in these areas and are addressing these issues.

When do you hope this will be available to farmers?

Given the length of the regulatory pathway, I would say 5-7 years. However we should have conclusive results on the lines’ efficacy in 1-2 years, so may be able to accelerate the process by using these results to encourage funders and regulatory bodies, especially in countries where MLND is a major problem.

Why did you decide to pursue a career in this area of plant science?

I became fascinated with plants during my undergraduate, due to their extreme weirdness compared to animals – the aliens of most people’s imagination are more similar to us than plants – they move, eat, etc. From there, I became interested in using molecular biology to improve crops, which I believe has huge potential to increase farming efficiency without increasing limited chemical inputs. I also like to travel, so visiting Kenya to work with collaborators was an attraction!

For more information on MLND, visit the MLND Portal hosted by CIMMYT: http://mln.cimmyt.org/mln-overview/