A tiny spore from a water mold was on a journey to change history and science, beginning in the Toluca Valley, just west of Mexico City.

There it drifted on a light breeze, floating from a wild potato to a farmer’s potato plant, infecting it with a disease called late blight. Soon the pathogen hitchhiked on potatoes headed to the US, causing damage to potato fields along the way.

Finally, in 1845 an infected potato was loaded onto a ship bound for Europe and Ireland, and when it arrived this water mold became a cold-blooded killer.

And it kept on killing for five long years. 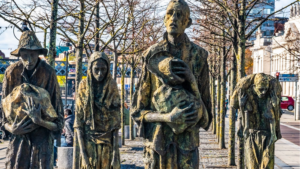 It triggered suffering throughout Europe, including starvation and political upheaval, since so many depended on this productive crop.

In Ireland the opportunistic pathogen, until then unknown to science, was brutally efficient in its destruction. A few days after infecting a plant its leaves would melt and turn sickly brown. The tubers rotted into a reddish-brown slime, giving off a dank odor that foreshadowed the death of both the potato crop and the people that needed it to live. 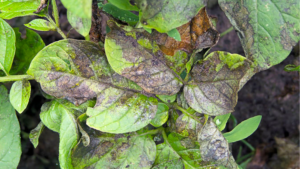 During previous decades, potato crop failures were a regular occurrence in Ireland, but these were usually regional and temporary.

This year would be different.

The moist spring of 1845 was a favorable environment for late blight, and it quickly wiped out a popular variety called the Lumper, which many Irish poor depended on for sustenance. But it killed all of the other varieties, too. Then it laid dormant during the winter in tubers and sprouted in the spring, continuing to infect (via wind and water) the neighboring potato plants, which were poorly tended since few survivors were left to do the work. 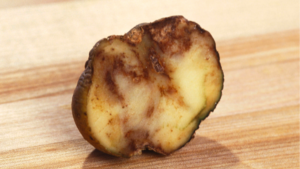 The Irish Potato Famine (in Ireland it’s called The Great Famine) lasted from 1845 through the early 1850s, when at least one million people died of starvation and disease. 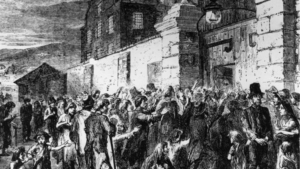 Many others were forced off their land, pressed into workhouses, or lived in the streets. Over a million Irish emigrated, seeking refuge in Canada, Australia, and the US (my great-great grandparents among them).

A Compassionate US Response

In 1847, Congress commissioned a volunteer captain and crew to sail a US warship to Cork, Ireland with relief. Stripped of its guns, the USS Jamestown carried 8,000 barrels of food donated by citizens moved by the suffering of the Irish. 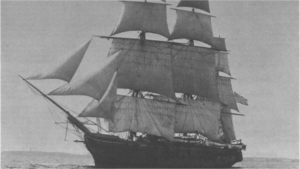 Most of the food onboard was provided by ordinary folks in Boston, New York, Chicago, and from small towns like Ottawa Illinois. Farmers, factory workers, and churches gave generously, as did our most vulnerable–including African-American slaves in Virginia, Choctaw Native Americans in Oklahoma, and young orphans in New York. Over 100 more relief ships followed, and their contributions inspired us then, and now.

This was among the first examples of disaster assistance from one nation to another–an act of US compassion and leadership which a century later helped lead to the creation (by an Irish-American President) of the US Agency for International Development and the Peace Corps.

Science Grows Out of Catastrophe

The crisis profoundly changed Ireland (where its population has yet to reach its pre-famine numbers), but it also spurred the creation of the science of plant pathology. 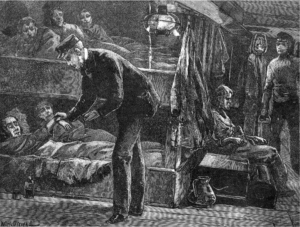 “Coffin ships” transported Irish to US, Canada, and Australia during the famine

At the time, many believed that late blight was the result of spontaneous generation from decaying vegetation, the wrath of God, or even “locomotives traveling the countryside at devilish speeds of up to 20 miles per hour and discharging electricity harmful to crops they went by.”

Reverend Miles Berkeley, an amateur biologist from England, suggested the mold on the leaves was the real cause, a revolutionary idea that wasn’t quickly accepted by his peers.  His work was later verified by German scientist Anton de Bary, who gave late blight (an oomycete) its Latin name, Phytophthora infestans, meaning “plant destroyer.” (The name is certainly apt since during World War II both the US and Germany studied late blight as a possible biological weapon.) 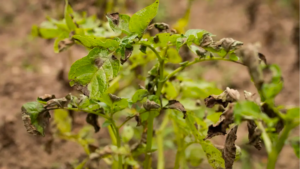 The work of these early plant pathologists contributed to Louis Pasteur’s germ theory over a decade later, forever changing the way we look at our health and the world around us.

Recently, scientists studied the dried leaves of Irish potato plants from that era to follow the forensic trail of the pathogen. They learned that its DNA is twice the length of its relatives, explaining its adaptability and virulence.

Yet 170 years after the Irish Potato Famine, with all of our remarkable advances in science and technology, we still haven’t beaten this persistent little microorganism, which continues to evolve and evade our efforts. It’s resurgent in Europe, and the threat is expanding in Africa. 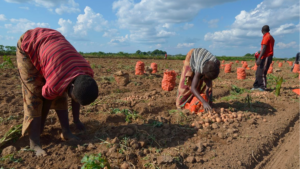 Today, potatoes are the world’s third-most important food crop, with production doubling in the past 25 years, mostly in East Africa. Potato plants produce more nutritious food more quickly, on less land, and in harsher climates than any other major crop.

However, in Kenya and Uganda, where over 1 million smallholder farmers grow potatoes, late-blight disease can destroy up to 70 percent or more of their harvest, costing farmers in the developing world $10 billion each year, and threating their families’ income, nutrition, and health. This is even more concerning as COVID-19 creates unprecedented challenges for food systems in developing nations.

After 40 years of intensive efforts, growers have abandoned conventional breeding to combat the pathogen because it always adapts to overcome the feeble resistance in new varieties.  Growers in wealthier nations spray their potatoes with chemical fungicide over a dozen times a season, a method unavailable or unaffordable to farmers in most developing countries.

Today late blight is becoming resistant to fungicides, and farmers everywhere–in the US, Europe, Africa, and the rest of the developing world–are worried and looking for solutions.

A New Hope for a Disease-Free Potato

But now we are on the cusp of an historic breakthrough. After two decades of patient research in Peru, Kenya, and Uganda conducted by intrepid researcher Marc Ghislain and his colleagues from the International Potato Center, we have a durable and safe solution for late-blight potato disease. 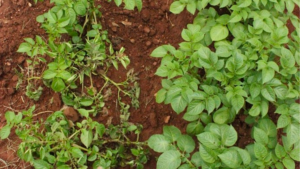 With additional support from The 2Blades Foundation, this new disease-resistant potato has been tested in Ugandan fields for the past five years and “consistently displayed complete resistance, not needing a single drop of chemical fungicide,” tripling yields and potentially increasing farmers’ incomes by up to 40 percent. 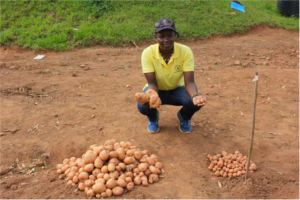 Farmers are eager to try the new variety, which will require less land, water, and chemicals.

Marc Ghislain’s current goal is to bring this disease-resistant potato variety to market, gathering data from field trials and preparing the potatoes for bulking and distribution. 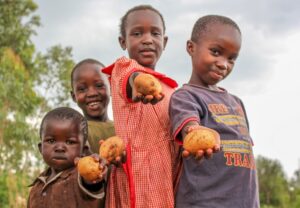 He is the face of 21st century development assistance, and an essential part of the global value chain for food security if we are to feed the 2 billion additional people who will live on the earth by 2050.

No famine is without political and social complexity. Yet one clear lesson from the suffering of the Irish is that we can — and we must — use science to achieve food security for all.