What are TALENs and how will they impact global food security? 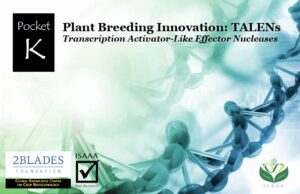 The 2Blades Foundation worked with the scientists who oversaw the discovery of TALENs to oversee patent protection and licensing for research and commercial applications. Together, the scientists and 2Blades exclusively licensed biomedical rights to Life Technologies (now ThermoFisher) for commercialization and all rights for research and reagent uses while 2Blades Foundation led the licensing for use of TALENs in plants for agriculture.

Plants are constantly exposed to various biotic and abiotic stresses. Thus, scientists continue to develop tools that help improve the field of plant breeding. These new tools and practices are referred to as plant breeding innovations, which include both precision IT-based tools and new molecular breeding techniques.

CRISPRs have become the most popular of the genome editing techniques. Yet, TALENS are extremely precise and have additional capabilities, such as targeting any DNA sequence, discriminating between methylated and unmethylated DNA targets, and modifying DNA within organelles such as mitochondria.

Transcription activator-like effectors (TALEs) are proteins made and used by plant pathogenic bacteria to control plant genes during infection. In nature, TALEs bind to plant DNA sequences and activate genes. Binding is targeted to specific DNA sequences through amino acid repeats of the TALE protein that recognize specific DNA bases by a set of biochemical rules or “code”. Researchers can use this code to customize TALEs and TALE protein fusions to bind to any desired DNA sequence. TALENs are protein combinations composed of two parts: one part is the TALE that targets the protein to a specific DNA sequence and the second part is a nuclease (N) that cuts DNA. Fok1 is a nuclease that is commonly used in TALENs (Figure 1).

or incorporate new DNA at the position of the break. The outcome is either small insertions or deletions that create sequence diversity, as often found in nature, leading to new functions or inactivating existing ones. Additionally, new genes can be inserted.2,3 These molecular scissors provide incredibly precise means to fine-tune traits in a targeted, predictable fashion anywhere in the genome.

Similar to ZFNs, TALENs are modular proteins, but the structure of TALEN DNA binding domains makes them simpler to design.

In 2009, the discovery of the TAL Code was first published in Science by Ulla Bonas, Jens Boch, Thomas Lahaye, and Sebastian Schornack at the Martin Luther University in Halle, Germany. The 2Blades Foundation, a US non-profit organization, worked with the scientists to oversee patent protection and licensing for research and commercial applications. Together, the scientists and 2Blades exclusively licensed biomedical rights to Life Technologies (now ThermoFisher) for commercialization and all rights for research and reagent uses while 2Blades Foundation led the licensing for use of TALENs in plants for agriculture.

New uses and improvements to TALENs continue to emerge. For example, in 2020, a rapid TALEN preparation protocol was developed based on the widely used Golden Gate TALEN and TAL Effector Kit 2.0. The protocol involves the use of a set of linear monomers, a Fok1 backbone plasmid, and a straightforward pipeline to assemble the ready-touse TALEN expression. This TALEN construction pipeline has high reproducibility, reliability, and an efficiency of over 80%. Furthermore, it was shown that these customized TALENs performed with better editing efficiency than CRISPR.

TALENs can be applied to help protect plants from the effects of climate change. Genes that play a role in resistance to pests, diseases, or protection from harsh environmental conditions, such as drought and salinity, can be edited to enhance resilience. TALENS have also been used to improve the quality of products derived from crops.

Now gene-edited soybean plants produce premium quality high-oleic soybean oil sold as Calyno by Calyxt. It became available in the U.S. market in 2019, making it the first commercialized product from a gene-edited plant.

TALENs have been used in rice, one of the world’s most important food crops, to engineer resistance to the destructive disease, bacterial blight, caused by Xanthomonas oryzae. The rice gene OsSWEET14 encodes an essential function for Xanthomonas to infect and cause bacterial blight. By editing the regulatory region of the gene, researchers generated heritable disease resistance.

The commercial potato variety, Ranger Russet, suffers from browning, bitter taste, and high levels of potentially carcinogenic acrylamides. TALENs were used to knockout the vacuolar invertase gene (Vlnv) producing improved properties. The amounts of reducing sugars were undetectable, and chips produced from these potatoes had a reduced level of acrylamide and a more desirable light color.

To reduce cholesterols and related toxic steroidal glycoalkaloids, TALENs targeting the SSR2 gene were delivered into potato using a transient Agrobacterium transformation method. In the resulting potato lines the SSR2 gene was inactivated and no TALEN transgene remained in the plant. This new method can help to accelerate the use of genome editing technology to benefit crops like potato that do not have parent lines with homozygous genomes, such as inbred lines.

To develop TALEN tools for corn (maize), scientists made stable, heritable mutations at a visible marker, the glossy2 (gl2) locus. Transgenic lines containing mutations were obtained and three of the novel alleles were able to confer a glossy phenotype. The use of TALENs in maize is a powerful tool for genome mutagenesis, discovery of gene function, and trait improvement.

Whereas many organisms have one set of chromosome pairs, bread wheat varieties carry three pairs, increasing the complexity for gene editing. Scientists attempted to engineer resistance to powdery mildew, a widespread disease, by testing both TALENS and CRISPR-Cas9 on the MILDEW-RESISTANCE LOCUS (mlo) gene. They succeeded in making TALEN-induced mutations

in all six sets of mlo genes, resulting in plants with essentially complete resistance to the wheat powdery mildew pathogen.

The 2Blades Foundation holds exclusive global rights for uses of the TAL Code and TALENs in plants. 2Blades has worked extensively to create simple, broad access to this versatile platform to improve the efficiency and precision of plant breeding.

For commercial applications it has licensed on a non-exclusive, tiered basis to a wide range of users, from large commercial seed companies to smaller agribiotech companies. 2Blades also gives no-cost TALEN rights to non-profit and multilateral entities, such as the International Rice Research Institute, to facilitate the improvement of crop varieties and support innovation to benefit food security.

Sugarcane is known as one of the most efficient feedstocks used for bioethanol production because of its superior production of biomass and accumulation of sucrose in stems. To further enhance its biofuel yield, researchers successfully targeted 107 out of 109 copies of sugarcane’s lignin biosynthetic gene caffeic acid O-methyltransferase (COMT) using TALENs. This led to mutants with 19.7% lignin reduction and up to 43.8% improved saccharification efficiency without affecting biomass production and maintaining good agronomic performance.

Algae, such as Nannochloropsis species, accumulate large amounts of lipids through photosynthesis. These lipids can be utilized as feedstocks for sustainable new energy products called biodiesels. However, production of algal biodiesel is more expensive than fossil fuel production.

All-in-one expression vectors for Platinum TALENs targeting the nitrate reductase gene, NoNR, and the acyltransferase gene, LPAT1, were transfected into Nannochloropsis oceanica. High genome-editing efficiency was achieved without any off-target editing. Edits in both genes were obtained through the simultaneous introduction of TALENs targeting each gene. The loss-of-function phenotype of NoNR was also confirmed. The findings could help develop techniques for molecular breeding of Nannochloropsis species for biofuel production.

Recently, a new tool—TALE-based editors—were used to successfully edit the mitochondrial DNA within living cells in a precise manner. Scientists found a chemical that enabled them to change a cytosine base in the DNA code to thiamine, enabling the correction of specific DNA bases in the mitochondrial genome. This was achieved by delivering a TALE -based editor that can cross the mitochondrial membrane, resulting in the precise desired change. The novel approach may eventually become a tool that scientists use to make better models of mitochondrial diseases, and TALE editors can provide the means to treat mitochondrial associated diseases.

Because of its powerful applications to improve plants and other organisms, TALENs have been recognized by various entities. In 2011, Nature Methods hailed TALENs as the Method of the Year.23 The TAL Code was recognized as the Best Novel Agricultural Biotechnology by Agrow Awards in 2012 and was a finalist in 2017.

With the need to double food production to feed the projected population of 10 billion by 2050, TALENs and other new breeding innovations are essential tools to ensure food security.

4. Mah, A. 2019. Genome Editing Techniques: The Tools That Enable Scientists to Alter the Genetic Code. https://www.synthego.com/blog/genome-editing-techniques.

21. What is biotechnology? n.d. TALENs: Timeline of Key Events. https://whatisbiotechnology.org/index.php/science/summary/TALENs.

Pocket Ks are Pockets of Knowledge, packaged information on crop biotechnology products and related issues available at your fingertips. They are produced by the Global Knowledge Center on Crop Biotechnology (http://www.isaaa.org/kc). For more information, please contact: