Summary: The 2Blades Foundation is working with partners in Kenya to field test a resistance gene stack in potato against late blight disease in order to deliver field-validated late blight-resistant potatoes for smallholder farmers in East Africa.  2Blades is seeking $250,000 in 2020 to help bring this disease-resistant potato variety to market, gathering data from field trials and preparing the potatoes for bulking and distribution.

Background: Late blight disease caused by Phytophthora infestans is one of the most destructive crop diseases globally, affecting more than 7 million acres of cultivated potato and causing economic losses estimated at $10 billion annually in developing countries. The potato produces nutritious food more quickly, on less land, and in harsher climates than any other major crop. It is therefore of major importance for smallholder and subsistence farmers in developing countries, which produce over half of the world’s potatoes. However, control measure such as fungicides or resistant varieties may be unavailable or too expensive these farmers. In Kenya and Uganda, where over 1 million smallholder farmers grow potatoes, losses due to late blight can be up to 70 percent. 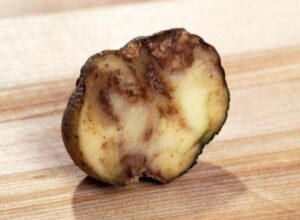 Impact: According to our partner in Nairobi, Dr. Marc Ghislain, Program Leader, International Potato Center (CIP), the new disease-resistant potato has been tested in fields in Uganda for the past 5 years and “consistently displayed complete resistance to late blight, not needing a single drop of chemical fungicide.” This new potato variety can boost African farmers’ production, increase their incomes by up to 40 percent, and improve their families’ nutrition and health.

Method: Wild relatives of potato harbor genes that confer a high level of resistance to late blight. However, conventional breeding methods to introduce these genes into cultivated varieties have been ongoing for more than 40 years, and varieties with single-resistance genes can be overcome by P. infestans. Dr. Ghislain and colleagues at the International Potato Center (CIP) have worked for several years with the support of CGIAR and USAID to introduce a “stack” of three resistance genes from wild potato relatives into farmer-preferred East African varieties. Following greenhouse tests that showed that these plants were highly resistant to late blight, Dr. Ghislain partnered with Dr. Alex Barekye and colleagues at the National Agricultural Research Organization (NARO) in Uganda to grow these potatoes under field conditions. Two seasons of trials have now shown that the resistance holds up well in the field in the absence of any fungicide applications. 2Blades has added its support to the effort to help continue field trials and advance the work towards deployment of durable late blight resistance.

The science: Late blight of potato, caused by the oomycete pathogen P. infestans, is adapted to short-distance air dispersal and can persist between crops as mycelium in infected tubers. Current management of late blight relies on a combination of cultivar selection (though no cultivar is resistant to all strains), good drainage, crop rotation, and frequent fungicide applications. However, it is not always practical or economical to deploy these methods – particularly for subsistence or smallholder farmers, and no method provides 100% protection. Creating durable resistance to late blight is a priority, and this strategy uses the natural genetic resources available in potato relatives.

Potato lines carrying the three resistance (R) genes provided complete resistance in the field over several seasons. A total of 13 resistant transgenic events with the 3R-gene stack from the potato varieties ‘Desiree’ and ‘Victoria’ grew normally without showing pathogen damage and without any fungicide spray, whereas their non-transgenic equivalent varieties were rapidly killed. Characteristics of the local pathogen population suggest that the resistance to late blight may be long-lasting because it has low diversity, and essentially consists of the single lineage, 2_A1, which expresses the cognate avirulence effector genes.

Yields of two transgenic events from ‘Desiree’ and ‘Victoria’ grown without fungicide to reflect small-scale farm holders were estimated to be 29 and 45 t/ha respectively. This represents a three to four-fold increase over the national average. Thus, these late blight resistant potato varieties, which are the farmers’ preferred varieties, could be rapidly adopted and bring significant income to smallholder farmers in sub-Saharan Africa.