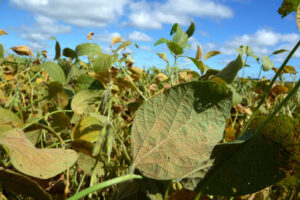 2Blades will apply its expertise in discovering cell-surface pathogen receptors to soy, bolstering a program on Asian soybean rust with additional types of immune receptors. The objective is to develop soy plants that are more durably resistant to Asian soybean rust.

Asian soybean rust (Phakopsora pachyrhizi) is a critical challenge for growers. If not managed properly with frequent fungicide applications, the disease can cause yield losses up to 80 percent. The pathogen causes extensive economic and yield losses in Latin America where 191 million metric tons were produced in the 2020-2021 growing season. In Brazil alone, Asian Soybean Rust has caused crop losses of more than US$ 10 billion since its first endemic outbreak in 2001.

In 2017, 2Blades and Monsanto—since acquired by Bayer—initiated a project on cell-surface receptors to tackle diseases that significantly reduce yield. The platform developed in that program will now be used to combat Asian soybean rust in parallel with a soybean rust collaboration between the two organizations initiated in 2018. The joint approach will provide for various modes of action against a complex pathogen, enhancing the robustness and durability of these independent solutions.

“Global demand for soybeans continues to increase—but diseases are relentless,” said Jeremy Williams, Senior Vice President and Head of Plant Biotechnology at Bayer Crop Science. “We’re proud of the progress we’ve made with 2Blades on our existing research projects, and we believe that additional modes of action can help advance Bayer’s vision of ‘Health for all, hunger for none.’”

“Asian soybean rust is caused by a highly adaptable fungal disease,” said Dr. Peter van Esse, leader of the 2Blades Group, a translational research site of the 2Blades Foundation at The Sainsbury Laboratory. “Working on combinatorial traits with leaders in both academia and industry will lead to a superior and more durable solution to tackle this key challenge for growers.”

2Blades bridges the gap between cutting-edge research and applications, pursuing its mission to ensure global food security by minimizing the impact of plant diseases. The 2Blades Foundation, based in Evanston, Illinois, is a 501(c)(3) charitable organization dedicated to the discovery, advancement, and delivery of durable disease resistance in crops. 2Blades establishes and manages development programs addressing significant unsolved crop disease problems in collaboration with leading research institutions around the world and at the 2Blades Group in The Sainsbury Laboratory, Norwich, UK. 2Blades manages a portfolio of specific traits and enabling technologies that it implements in its own programs and out-licenses for broad use.