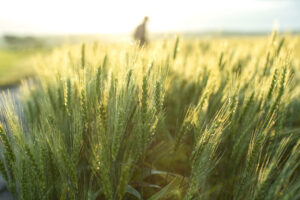 For vegetables and grains to reach your dinner table, they face a gauntlet of challenges before they even leave their fields. Our food crops are constantly exposed to stresses that affect their growth and productivity—both biotic (living things, like bacteria or insects) and abiotic (changing temperature or moisture).

Millions of years of evolution endowed plants with exquisite defenses to these threats. And for thousands of years, farmers have used selective breeding to enhance food crops’ defenses and make them even more resilient. Agricultural innovation, led by early scientists and innovators, helped us produce enough food to keep pace with the world’s population growth, from 1 billion people in the year 1800 to nearly 8 billion today.

Yet, now the human species faces one of its most daunting challenges: how will we produce enough food for the expected 2 billion people who will join us by 2050? And how can we do this as climate change multiplies both biotic and abiotic threats to our food crops?

Rising temperatures encourage the growth of pathogenic bacteria, oomycetes, and viruses. And every time we develop new plant defenses through conventional breeding, these pathogens evolve even more rapidly to overcome them because “mother nature bats last.”

And nature has been brutally efficient in evolving threats to attack our food supply, evidenced by over a dozen plant pandemics in the past 100 years, in critical crops like wheat, corn, and rice, imperiling the lives of millions, and costing farmers and consumers billions of dollars each year.

Scientists and their ideas are the ‘Seeds for Success’

Scientists are helping farmers to meet these threats with new breeding technologies that provide robust defenses to plant pathogens. Thus, scientists and their ideas are the seeds for success in our quest for global food security.

Because of climate change and rapid population growth, we don’t have enough time to use conventional breeding to grow the food we need, since it can take decades to develop new varieties that are resistant to plant threats. We must use effective and safe methods to speed up the work and progress toward food security.

CRISPRs have become the most popular of genome-editing techniques. Yet, TALENs are extremely precise and have additional capabilities, such as targeting any DNA sequence, discriminating between methylated and unmethylated DNA targets, and modifying DNA within organelles such as mitochondria.

Transcription activator-like effectors (TALEs) are proteins made and used by disease-causing bacteria to manipulate plant hosts to enhance infection. The bacteria inject TALEs into plant cells where they bind to plant DNA sequences and activate genes. Binding is targeted to extremely specific DNA sequences. In studying this process, researchers learned the precise ways TALEs recognize DNA and how to “redirect” the proteins to bind to new DNA targets.

In 2009, the discovery of the TALEs and their DNA interaction “code” was first published in Science, a leading peer-reviewed science journal, by researchers at the Martin Luther University in Halle, Germany.  Scientists soon showed they could direct TALE proteins to not only turn on desired genes but also to turn off and edit genes with great specificity.  For the editing function, researchers tethered a nuclease, a protein that cuts DNA, in order to create TALE Nucleases (TALENs).

TALENs can be used to make small insertions or deletions that create sequence diversity—as often found in nature—leading to new functions or inactivating existing ones. New genes can be inserted as well, making these “molecular scissors” an incredibly precise means to fine-tune traits in a targeted, predictable fashion anywhere in the genome. More recently additional gene-editing tools, such as CRISPR-Cas, have become widely used, yet TALENs match their precision and in some cases outperforms the CRISPR system.

Appreciating the powerful potential of these new molecular tools, the 2Blades Foundation, based in Evanston, Illinois, worked with the scientists to oversee patent protection and licensing for research and commercial applications. Together, the scientists and 2Blades exclusively licensed biomedical rights to Life Technologies (now ThermoFisher) for commercialization and all rights for research and reagent uses, while 2Blades carried out licensing for use of TALENs in plants for agriculture.

The TALENs technology segment reached approximately $650 million in 2019. With increasing government support for genome editing, market growth is projected to exceed $10 billion by 2026.

TALENs have been used for the development of:  high-oleic soybean oil that is low in polyunsaturated fats; rice that is resistant to bacterial blight; potatoes with less browning, bitter taste, or potentially carcinogenic acrylamides; and wheat that is resistant to powdery mildew.

While TALENs help us combat pests and diseases that attack our crops, it can also be used to make our crops more resilient to climate change effects, such as drought or salinity. TALENs have also been used in engineering biofuels from sugarcane and algae to help reduce dependence on fossil fuels.

The 2Blades Foundation holds exclusive global rights for uses of the TAL Code and TALENs in plants. 2Blades has worked extensively to create simple, broad access to this versatile platform to improve the efficiency and precision of plant breeding.

For commercial applications it has licensed on a non-exclusive, tiered basis to a wide range of users, from large commercial seed companies to smaller agribiotech companies. 2Blades also gives no-cost TALEN rights to non-profit and multilateral entities, such as the International Rice Research Institute, to facilitate the improvement of crop varieties and support innovation to benefit food security.

In a single generation we must grow more food, using less land, water, and chemicals. If we don’t innovate, millions more could go hungry, economies could fail, and the very fabric of our societies could be torn apart.

Failure is not an option. We must use all the tools in our toolbox, so that agriculture can help build a world that is more prosperous, productive, and secure—for all people.