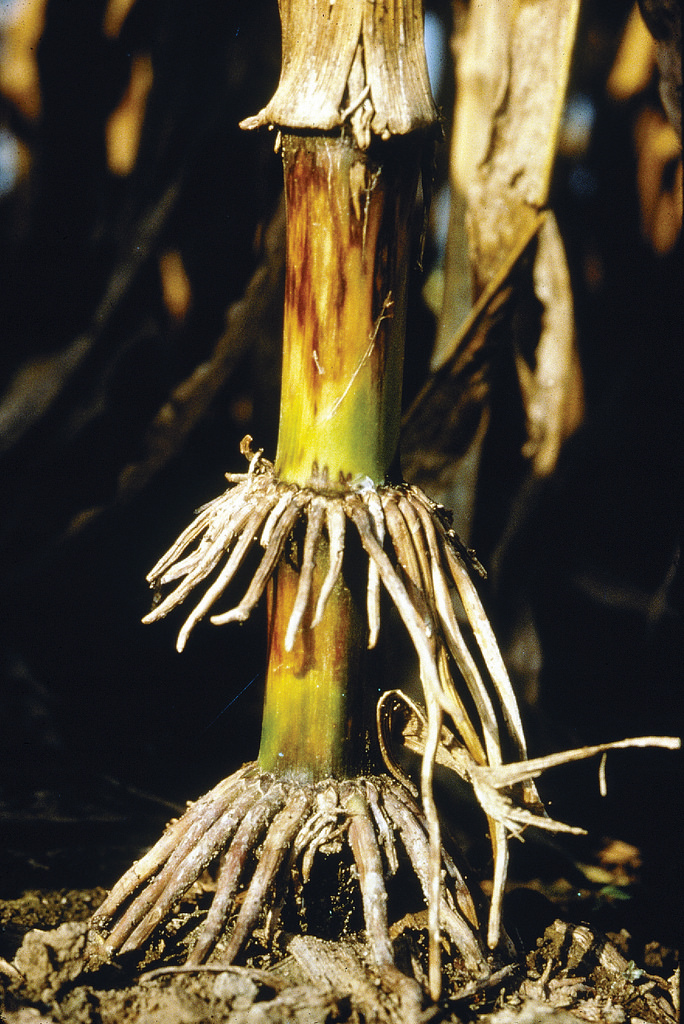 Outside of maize stem showing browning of the pith of the basal internodes caused by Diplodia (Stenocarpella) stalk rot.
Photo credit: CIMMYT, via Flickr (CC BY-NC-SA 2.0)

Stalk and ear rots of corn are economically important mid- to late-season diseases that are caused by multiple fungal pathogens. Few effective treatment options are available, and genetic resistance is limited. Stalk rot diseases cause yield losses by damaging the vascular tissue, thus decreasing the nutrients available to the ear, and by weakening the stalks which can cause the plants to fall over. Stalk rots are a consistent cause of yield losses; they were responsible for nearly a quarter of all US corn disease losses from 2012-2015, although the most important causal pathogen varied from year to year.

Many of the same fungi that cause stalk rots also cause ear rots, and these also cause consistent yield losses. However, aside from the yield losses caused by these pathogens, several important ear rot pathogens produce compounds called mycotoxins that are toxic to humans and livestock. Mycotoxin-contaminated grain must be diluted in the case of low levels of contamination, or removed from the food supply in the case of high levels. In developing countries, mycotoxin screening is generally not available, and consumption of contaminated grain causes human health issues such as stunting in children and cancer in adults.

2Blades is collaborating with The Sainsbury Laboratory and Bayer Crop Science to look for new sources of resistance to the fungi causing these diseases. Since the diseases are caused by multiple pathogens, we are seeking combinatorial solutions that will improve resistance to all the major pathogens for each complex of diseases.

Corn stalk rots are often referred to as stalk rot complex because they are caused by multiple pathogens which can often occur together. The most common stalk rots are caused by fungi, including Anthracnose (Colletotrichum graminicola), Diplodia (Stenocarpella maydis), Gibberella  (Fusarium graminearum), Fusarium (Fusarium verticilloides, formerly Fusarium moniliforme), and charcoal rot (Macrophomina phaseolina). These fungi over-winter in the soil or on crop residue and infect through roots, wounds such as insect damage, or some through leaf sheaths. The ideal environmental conditions for infection are somewhat different for each pathogen, but in general, corn plants that are stressed by other diseases, drought, or poor nutrition are more vulnerable to infection. Symptoms generally appear after flowering. Fungicide treatments are generally not effective against stalk rots.

Several of the stalk rot fungi also cause ear rots, including Diplodia, Gibberella, and Fusarium; another major cause is Aspergillus flavus. Infection of ears generally occurs through wounds or through the silks. Aside from the yield impacts of these diseases, ear rots are notorious for production of toxic compounds called mycotoxins. The most important of these are aflatoxin produced by Aspergillus flavus, fumonisins produced by Fusarium verticilloides, and deoxynivalenol (DON, or vomitoxin) produced by Fusarium graminearum. These compounds are toxic to livestock and humans, and the USDA and FDA set allowable limits for them in animal feed and the human food supply. Grain that is contaminated with low levels of mycotoxins may be sold at a discounted price and diluted to use in feed, but grain with high levels of contamination must be discarded. In developing countries, subsistence farmers often do not have access to mycotoxin testing or cannot afford to discard grain, and aflatoxin in particular is noted for causing stunting and developmental delays in children.

Mycotoxin contamination ranged from 117M to 2.6B bushels in this time period